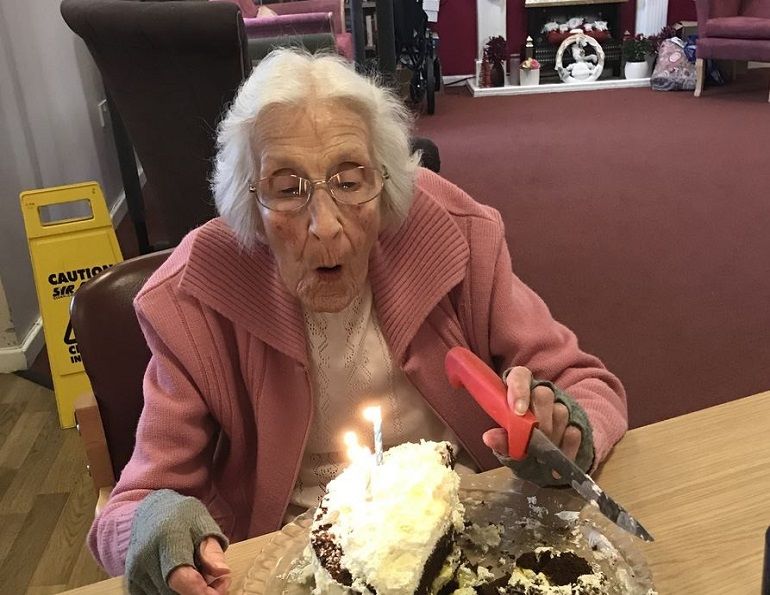 Despite the current pandemic situation the team at Community Integrated Care’s, Charlotte Grange Care Home were determined to celebrate the birthday of their oldest resident, Maisie Rymer.

Maisie was born and raised in Greenwich in London, on 21st December 1917. One of four children she attended Holy Trinity Church School in London. Her father was a Manager in a local undertakers, so she would often help out. However, when she left school she got a job working for Siemens. As part of her job she was asked to move to Hartlepool to train staff based in the North East.

Although when she initially moved to Hartlepool she was lonely, with no family and friends around her, she soon join lots of social events and joined a number of clubs and quickly made lots of life-long friends. She met and fell in love with Eric and they had a son, Christopher.

Maisie enjoys life and, earlier this year, was delighted to be interviewed by BBC Radio Tees as part of their ‘Making a Difference’ slot that featured Charlotte Grange who set up a Pen Pals Scheme which has proved hugely popular within the local community and beyond. Maisie received a letter from a kind stranger in Somerset who also sent her special birthday wishes on her 103rd birthday. At the time Maisie laughed that it had taken her 102 years to get on the radio!

Wendy Nicholson , Manager at Charlotte Grange Care Home said.
“It was lovely to be able to celebrate Maisie’s 103rd Birthday, which was particularly exciting for the team as Maisie is the oldest resident in the home.” He continued “We are all working hard at this difficult time to ensure that residents are kept active and entertained during this pandemic. Celebrating birthdays and special events like this are important for the morale of staff, residents, and their families at this difficult time”

Martin McGuigan, Managing Director at Community Integrated Care said
“It sounds as if Maisie had a wonderful birthday and it was lovely that she got lots of extra birthday messages thanks to the Pen Pal Scheme set up in the home”

For more information about our Residential Care Services, get in touch: